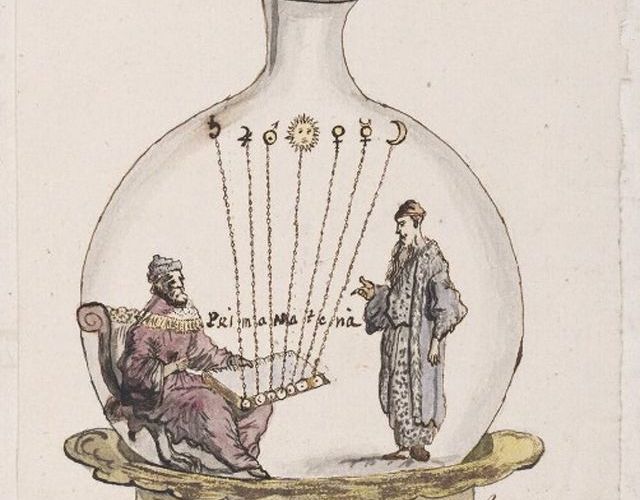 This following image is a page from the Alchemical and rosicrucian compendium (Mellon MS 28). The work is held at Yale University’s Beinecke Rare Book & Manuscript Library in New Haven, Connecticut, USA:

The vessel depicted in the image contains Hermes Trismegistus, who is displaying the symbols for the seven planetary metals of alchemy to a student. Moving from left to right, the metals are: Lead (Saturn) — Tin (Jupiter) — Iron (Mars) — Gold (Sun) — Copper (Venus) — Quicksilver (Mercury) — Silver (Moon).

A series of chains are shown tethering the metallic symbols to the book/tablet held by Hermes. Between each chain, a lettering spells out Prima materia, which term translates to “First Matter.” The Prima materia is the formless and chaotic underlying component from which the alchemical opus commences.

Various names and attributions have been given to the Prima materia. In Ruland’s 1612 alchemical dictionary, Lexicon alchemiae sive dictionarium alchemistarum, listings include “Metallic Entity,” “The Matter of all Forms,” “Pure and Uncontaminated Virgin,” “Chaos,” and “Chamber.” This language implies a substance or essence which precedes, and forms the inner base of, all other matter.

Within the alchemical tradition, similar notions of a formless and underlying substance have been developed by figures such as Paracelsus, whose Yliaster denotes a similar concept. Diana Fernando notes that:

“Accordingly, the first body, the Yliaster, was nothing but a clod which contained all the chaos, all the waters, all minerals, all herbs, all stones, all gems. Only the supreme Master could release them and form them with tender solicitude, so that other things could be created from the rest.”

Like in so much of alchemy, a teleological or evolutionary process is implied here. Whereas the whole potential of mineral and vegetable forms are already contained in the Prima materia or Yliaster, they must be properly coaxed out by a skilled adept. This is a fantastic example of a core alchemical notion: The Great Work assists in facilitating a drive towards development and evolution already inherent in nature. In this regard, Paracelsus likens the Yliaster to a fossil trapped in wood. One can think of this as an abstract or early-dimensional mapping of alchemical processes in potentia

Looking into the classical past — and outside of strictly alchemical traditions — we find the Greek idea of Arche (ἀρχή). Arche is a formative and substantive principle. The sense or meaning to which Arche translates is to that of “first cause,” “beginning,” etc. Later, it the term came to mean “first principle,” “first realm,” “place of authority,” or along related lines. Philosopher’s such as Thales, Anaximander, and Anaximenes helped to develop this idea. Like Paracelsus’ Yliaster, Arche also serves as a kind of template or potentiator of later processes and objects.

Later, in the early modern period, western philosophy concerned itself with notions of substance — a term meaning that which stands-under all manifested material. Associations to philosophical conceptions of substance mainly hearken to Spinoza and Locke. In both cases, substance resonates yet again with the idea of a formless or quality-free base which precedes and upholds all qualitative forms.

As a physical object, and descendant of the Prima materia itself, Mellon MS 28 is fascinating in its own right. The Beinecke catalog abstract describes the work as a “Manuscript on paper of a pietistic, mystical text in prose and verse, illustrated by a great variety of illustrations cut from manuscripts of smaller dimensions (plus some prints), and pasted in.”

In turn, one can envision the manuscript as a proto-version of an esoteric zine. Indeed, Brian Cotnoir’s own contemporary alchemical zines (which I’ve written about) draw upon a similar cut-and-pasted image/text style. Such zines are — as Mellon MS 28 — assembled from primary sources, secondary images, triune copies of copies, and so forth. This DIY quality of assemblage is the hallmark of a zine. Surely MS 28 fits such criteria.

I can imagine a particularly creative scribe or Rosicrucian punk getting his hands on some valuable old manuscripts and hacking them apart to create an entirely new, symbolically fresh, syncretic piece. Here the Green Lion (Leo Viridis) mingles with verses from the Book of Corinthians. Together they become acquainted with the Prima materia. It is a wondrous and heady manuscript.

Onward with the Great Work….